We invite you to support our efforts to preserve our historic church, please donate using the button below or call us to donate in other ways.

The First Congregational Church Society of the Town of Canandaigua, NY, with the leadership of nine men and women and the inspiration of Zadok Hunn, was incorporated in 1799.  Services were held in homes and barns under the spiritual leadership of the first “settled” minister, Rev. Timothy Field, a young Yale graduate, who served from 1799 to 1807. 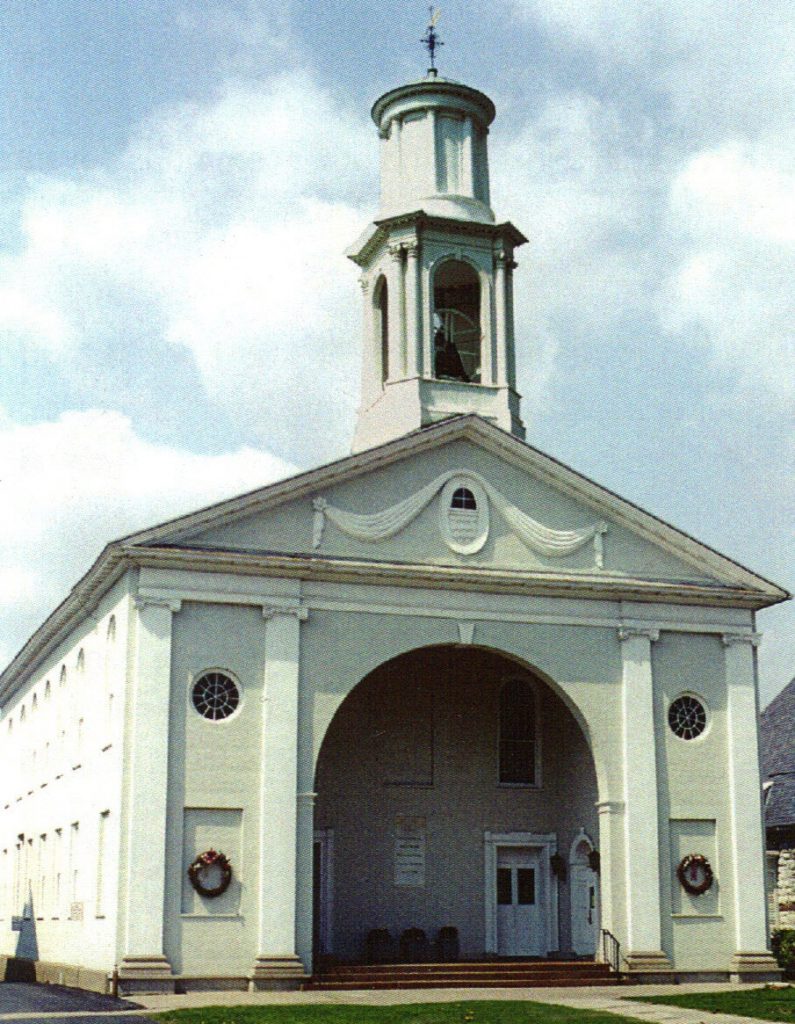 Thirteen years later, in 1812, with a membership of about forty communicants, the Society erected the present stately meeting house much as you see it today. While the plans were brought from New England, the architect is unknown.  The roof trusses were made of hand-hewn wooden beams, fastened with wooden pegs, and the exterior walls were made of bricks from Phelps. NY.  The imposing Federal-style building, with its Ionic pilasters, wheel windows and pediment swag of teakwood is a testimony to the courage and faith of that small body of sturdy inhabitants.  The arched portico and the gold-clad barbless feather weather vane atop its domed bell tower set it apart from the early New England church – truly unique!
(Bell Tower was renovated in 2019 – see photos here.) 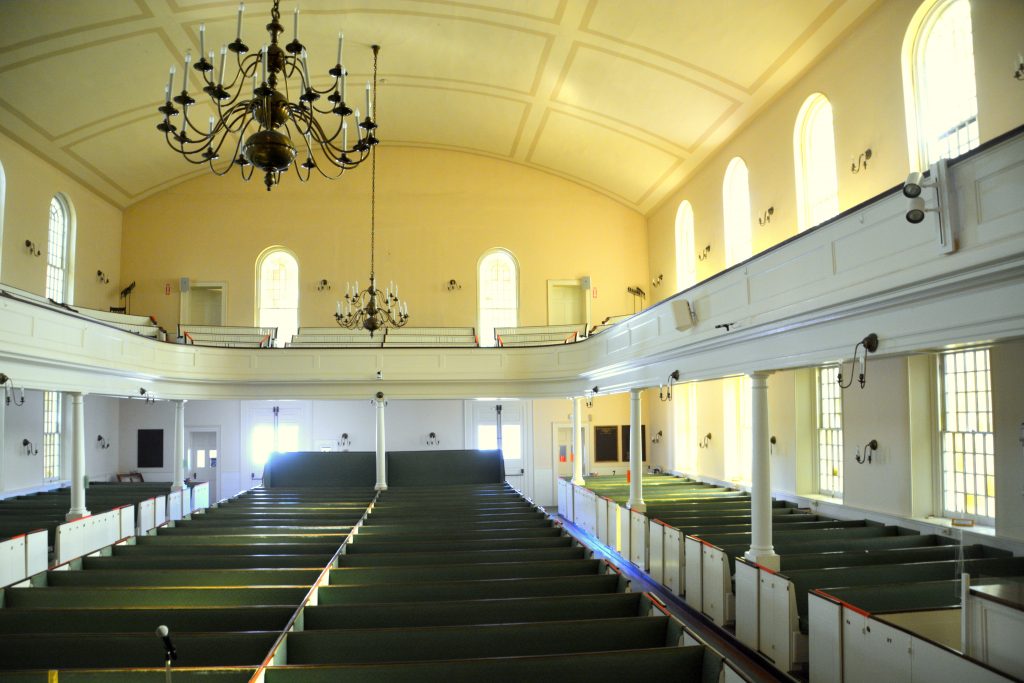 The construction cost of $12,996.31 was borne by the congregation. Funds were raised by subscriptions.  A total of $5,000 was pledged — one-third in cash and two-thirds in cattle and grain.  A mortgage covered the remaining $8,000. The interior, with its enclosed box pews, amber glass windows and horseshoe balcony, still carries the pioneer concept of worship.  A pulpit and sounding board were added in 1826, gas lighting was installed in 1850 with electric lighting coming along in the early 1900s. The magnificent pipe organ was built in 1882.

Designated as a National Landmark by the U.S. Department of Interior in 1958, the original building exterior remains unchanged with the exception of a sanctuary enlargement in 1848 (which extended the building 16 feet to the west) and construction of the adjoining Gothic Revival chapel, added in 1873.

The chapel, of a distinctly different style from the towering simplicity of the original meeting house, has long been a source of inquiry and local lore:

By 1862, the original brick edifice was bursting at the seams. For nearly 11 years the Trustees debated and discussed the question of expansion versus tearing down the original structure and building anew. At an 1867 congregational meeting, the question was finally put to a vote with a resounding NO! to demolition of the original brick building. But what to do about the continued overcrowding?

Despite dire economic conditions of the time, the membership voted to construct an adjoining chapel.  A Gothic Revival style was selected, in marked departure from the austere Federal style of the original building. The new structure would feature warm, dark wood and impressive, colorful stained glass windows. The chapel was completed in 1873. 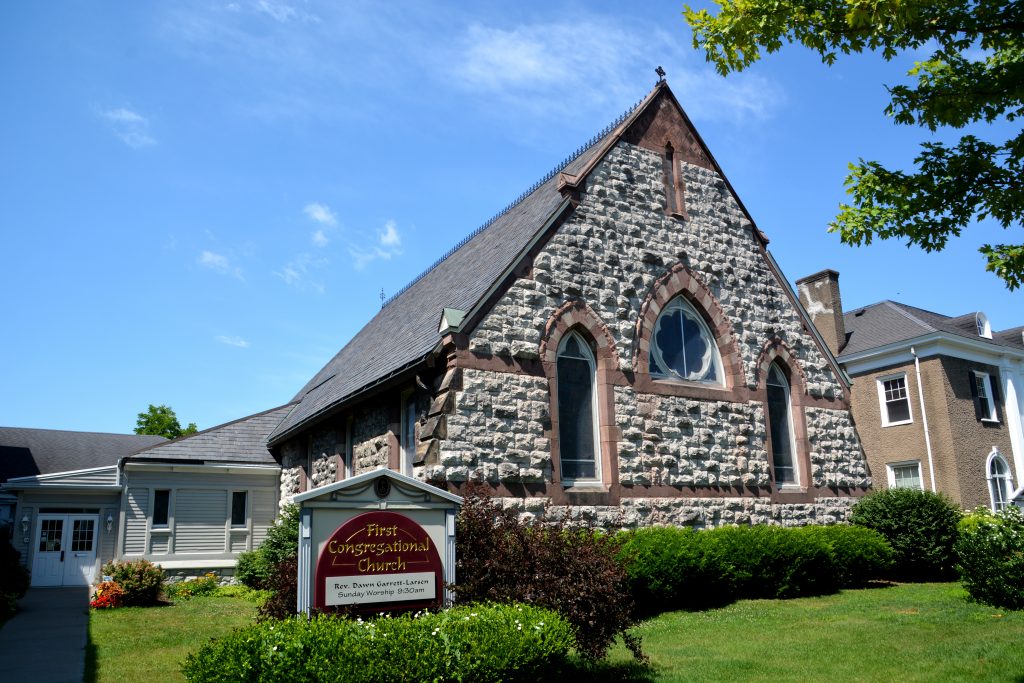 Although the final construction cost was over-budget at $22,400 ($450,000 in today’s dollars) the congregation rose 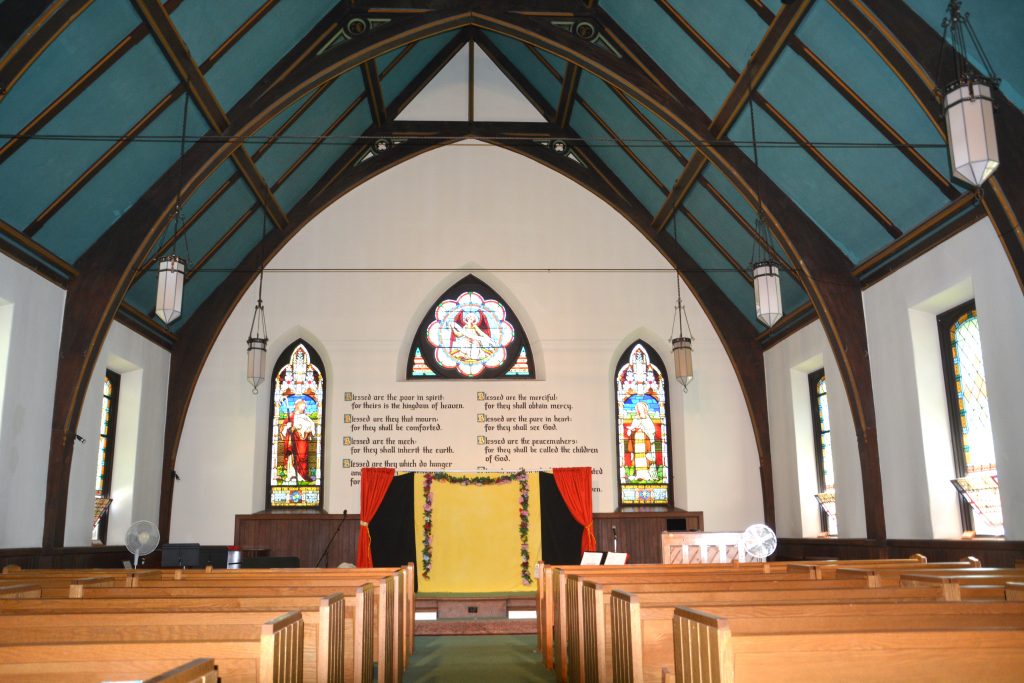 to the challenge with the generous assistance of Church Trustee (and former New York State Governor) Myron H. Clark and his daughter and son-in-law Mr. & Mrs. Frederick Thompson.

Today, we are indebted to the wisdom of the Trustees and congregation, in particular – Francis Granger – who advocated against demolition of the original, historic Old Brick Meeting House, preserving it for centuries into the future.

With thanks to former Church Historian Phyllis M. Purple.

In 1993 the church members were proud recipients of the coveted Tender Loving Care Award bestowed by the Landmark Society of Western New York, recognizing the meticulous care and outstanding preservation of  the oldest public building in western New York State. 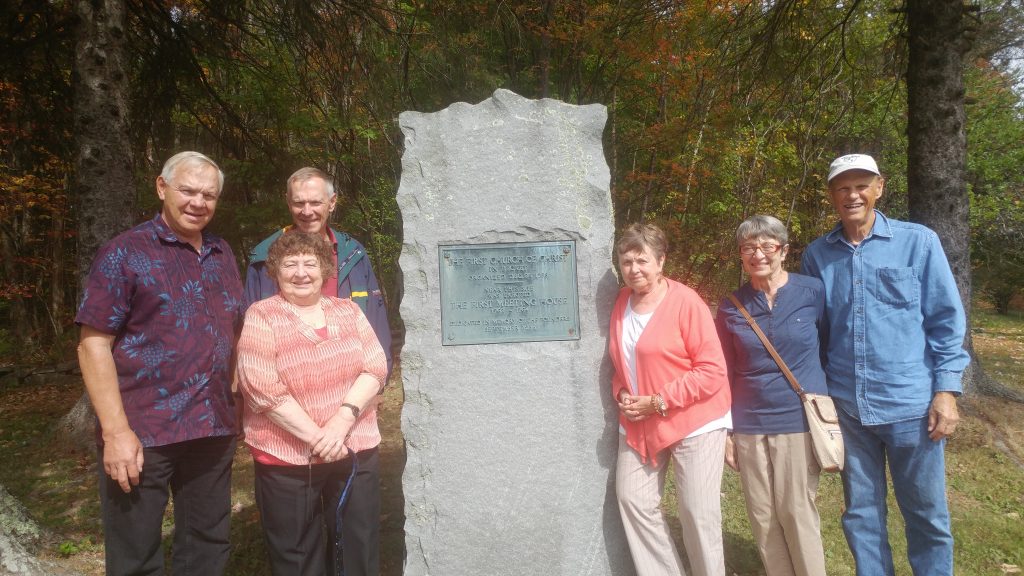 Church member, Don DeSmith (far left) with his family, standing at the site of Rev. Zadoc Hunn’s first church, in Beckett, MA, where he was ordained circa 1766.  Rev. Hunn was Mr. DeSmith’s 5 x great grandfather.  It was Rev. Hunn who started our church, First Congregational, in Canandaigua and 8 others in Ontario County.